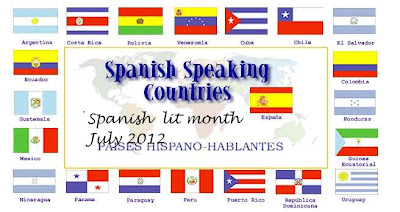 Today's the first day of Spanish-Language Literature Month, hosted by Winstonsdad's Blog and Richard at Caravana de recuerdos! I'm hoping to do with Spanish Lit Month what I did with German Lit Month back in November - read (some of) my backlog of TBR books originally published in the language or, in a couple cases, originally published in English but by Latin American immigrants. Here goes:

I'm hoping to get through at least half of these, including most of the magical realism and at least one of the picaresque novels. With a move, a fairytale readathon, reviews for publishers, and college preparations coming up in July, plus continuing to read for the Classics Bribe and A Victorian Celebration, my reading time for this event might be a bit limited...
Posted by Unknown at 12:01 AM