Countdown City by Ben H. Winters (First Look)
Because I loved the first book, reviewed here.
If You Could Be Mine by Sara Farizan (thanks, Jill at The O.W.L.!)
Wool by Hugh Howey (First Look)

Purchased:
Growing Up Shaker by Frances A. Carr
Ecotopia Emerging by Ernest Callenbach
Two utopian books in one week! I couldn't help picking up something at the Pleasant Hill Shaker Village (see Carr's book above), and I greatly enjoyed Ecotopia several years ago.
The Princesse de Cleves by Madame de Lafayette
The Kin of Ata are Waiting for You by Dorothy Bryant
Letters of a Hindoo Rajah by Elizabeth Hamilton
Grandfather Tales by Richard Chase
Local interest: Appalachian folklore.
The Ballad of Frankie Silver by Sharon McCrumb
Local interest fiction: Frankie Silver case in Burke County, 19th century.
The Unredeemed Captive by John Demos
The Valley of Shenandoah by George Tucker
I was SO EXCITED to find this, especially since I don't think I'd heard of it before. This is a novel about life in rural Virginia, originally written in 1824. *squee*
The Carolinians by Jane Barry
Local interest historical fiction: Battle of Guilford Courthouse. 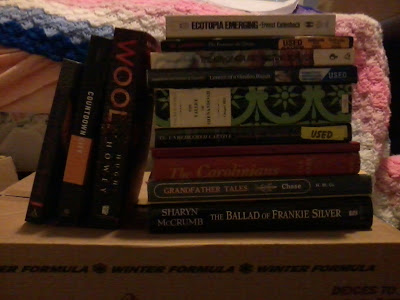 Posted by Unknown at 8:24 PM No comments:

Yikes! I just realized it's been 10 days since I last posted. I've hit a reading slump with two of the most recent things I've read, and I'm currently on week two of a busy vacation. Hopefully over this weekend I can  resume my currently failing attempt to catch up with blogging.
Posted by Unknown at 6:43 PM No comments:

YA Sci-Fi: Icons by Margaret Stohl

Publisher: Little, Brown
Date: May 7, 2013
Format: ARC
Source: publisher
Read: for review (disclaimer: I received my copy of this book for free in exchange for an honest review.)
Pages: 433
Reading time: three days

From GoodReads: Everything changed on The Day. The day the windows shattered. The day the power stopped. The day Dol's family dropped dead. The day Earth lost a war it didn't know it was fighting. Since then, Dol has lived a simple life in the countryside -- safe from the shadow of the Icon and its terrifying power. Hiding from the one truth she can't avoid. She's different. She survived. Why? When Dol and her best friend, Ro, are captured and taken to the Embassy, off the coast of the sprawling metropolis once known as the City of Angels, they find only more questions. While Ro and fellow hostage Tima rage against their captors, Dol finds herself drawn to Lucas, the Ambassador's privileged son. But the four teens are more alike than they might think, and the timing of their meeting isn't a coincidence. It's a conspiracy. Within the Icon's reach, Dol, Ro, Tima, and Lucas discover that their uncontrollable emotions -- which they've always thought to be their greatest weaknesses -- may actually be their greatest strengths.

My review: Icons was an enjoyable read in that much of it was fast-paced and exciting. I breezed right through the pages, which is especially refreshing given my recent slowness of reading. It reminded me a good deal of I Am Number Four, both in style and in the common themes of aliens and teens with special powers.

Otherwise, however, I wasn't much impressed with Icons. I couldn't always figure out exactly what was going on. The characters are kept locked up under supervision? They have more freedom to run around than one would think? Dol loves Ro? Dol loves Lucas? They're trying to keep their abilities secret? They blatantly display and blab about their powers? Just stick with one situation and go with it!

Also, I didn't really find anything about Icons that made it stick out to me among other genre works. We have a dystopia run by aliens. Great. Personally, I prefer more socially-charged dystopian literature, where there's a deeper meaning behind the situation than just an entertaining story. Entertaining stories run together, meaningfulness does not. Will I continue with this series? Not very purposefully. Only if I happen to end up with the upcoming books, just because I hate to leave series unfinished.
Posted by Unknown at 9:51 AM 4 comments:

Speculative Fiction: Every Boy Should Have a Man by Preston L. Allen

Publisher: Akashic Books
Date: May 7, 2013
Format: paperback
Source: LibraryThing Early Reviewers
Read: for review (disclaimer: I received my copy of this book for free in exchange for an honest review.)
Pages: 192
Reading time: one day

From the back of the book: In a post-human world, a boy oaf comes home from school and finds a female man wrapped up in red ribbon. A note around her neck reads: Every boy should have a man. You're a fine son. Love, Dad. Preston L. Allen takes us on a journey into uncharted territory. He traces the story of the boy and the "mans" he loves as pets: Brown Skin who is not his, the tragic Red Sleeves who has no voice, and her quick-witted daughter Red Locks whose fierceness leads her out of backbreaking drudgery in the mines into the perils of battlefield to the savagery of cannibalism.

My review: The writing style of Every Boy Should Have a Man is simple and understated, yet the book packs a huge punch. Most prevalent is the theme of environmentalism, but others, such as religion, rear their heads as well. A few parts of the novel are unexpectedly emotional and tough to read. The story's blend of influences and themes make the book as a whole fascinating and thought-provoking.

Sections of the novel in turn seemed to demonstrate influences from Gulliver's Travels, early science fiction/fantasy stories, the Bible, and folk tales. Most obvious, as anyone who reads this book will discover, is the homage to "Jack and the Beanstalk." The story becomes increasingly allegorical, which particularly appealed to me, a fan of satiric speculative fiction. Much of the novel was therefore reminiscent of 19th and early 20th century sci-fi, a trend which I would love to see continued in today's novels!

This was a quick and engrossing read. In retrospect, the short length gave rise to some issues, namely that the plot seemed increasingly truncated and schizophrenic in its themes and style. It's just one of those books that some people absolutely love because of the same factors that cause others to hate it. The style and themes highly appealed to me, and I'm now considering which of my acquaintances I should force this onto next.
Posted by Unknown at 3:16 PM No comments:

Come Back Later: The Golem and the Jinni by Helene Wecker

Reasons for stopping: Motivation. I do not have it. Summer is so far much busier than I expected, I'm juggling online classes in the midst of alternating between interning and vacationing with my family, and I haven't even picked this up in...at least a week? Maybe more? I think, at this point, my time would be better served by moving on to briefer reads and coming back to this when I'm not quite so busy/stressed.

What I think so far: I've made it to chapter 12, page 180. I really like the blend of historical fiction (Victorian/immigrant era) and fantasy (lots of Jewish and Near Eastern folklore), and I think the historical aspects in particular are going to pick up in future chapters. The plot seems a bit slow so far - probably not helped along by my current lethargic pace of reading - but also promises to pick up more. This has the potential to be a fantastic read if I can get back to it at a better time.
Posted by Unknown at 7:47 PM No comments: