In 2008, author John Royce came out with the first book in his Legend of the Great Horse series, Eclipsed by Shadow. Two years later, he's following it with the second installment, The Golden Spark. The title and publication date of third and final book in the series has not been released yet.
In Eclipsed by Shadow, readers met twelve-year-old Meagan Roberts, a horse fanatic who lives with her parents and their mare, Moose. When Moose's pregnancy goes awry and she dies shortly after giving birth to her foal, Promise, Meagan is heartbroken, but turns to the new filly for hope. She meets an elderly woman who tells her of the "legend of the great horse," but she doesn't believe the story (c'mon, a magic time-traveling horse?). But when strangers show up who will go to any costs to obtain Promise, Meagan finds out that the legend is true...but not until she's been transported back to 20000 B.C.
Throughout the first book, Meagan goes on several time-traveling adventures. Some are short, others are long. In every adventure (prehistoric North America, the ancient Black Sea area, ancient Rome, the Mongols and medieval Europe), Meagan faces many challenges, but she also learns more about the evolution of domestic horses. Facing homesickness, she realizes that each time she finds the Great Horse in whatever time period she's in, she is brought one historical step closer to home.
Now to the book to be reviewed: The Golden Spark. After Meagan leaves medieval Europe, she finds herself on a conquistador's ship headed to New Spain. This isn't just anyone's ship, though - it's Cortes's, and Meagan is landed with the job of caring for his personal horse. Along with her new friend, a priest, she accompanies the Spaniards across the Atlantic and witnesses the brutal battles between them and the native populations of South America. Shortly thereafter, though, she awakes in 1666 England, where she becomes a stablehand on an aristocratic estate, falls in with gypsies, and eventually makes it to France, where she has a hand in training the king's horses...and catches the eye of the king himself. But eventually, growing ever closer to her home time, she makes it to 1816 - Britain again - where she finds employment and a temporary home with a horse-racing, steeple-chasing, formerly wealthy horse breeder and his family. Where to next? The third book picks up in the American West.....
I've enjoyed reading both of the Legend of the Great Horse books. They're great historical fiction, rich with details about both historical lifeways and horses. What's great about Royce's writing is that he smoothly incorporates all of these details into his novels and makes the information interesting, even if you're not really into horses or history. Royce manages to keep his plots exciting without making them unrealistic; he always sticks to history, but he doesn't let it get boring. His books are appropriate for most ages, too. While they're aimed at a young adult audience, adults could also enjoy reading them, and there's little content that's inappropriate for younger children. Royce's writing is also simple enough for a younger audience to understand easily, but not simple enough to turn older readers away. So, at least for this reader, the third book in the series is eagerly awaited!
Both ARCs of the books were received through LibraryThing; the first through Member Giveaways, the second through Early Reviewers. Both books are published by Micron Press.
Posted by Unknown at 2:06 PM No comments: 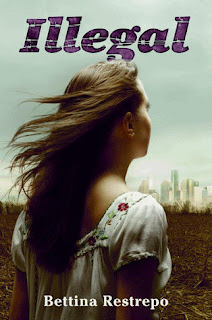 Illegal by Bettina Restrepo is a realistic fiction young adult book. It's about a fourteen-year-old girl, Nora, who lives with her mother and grandmother in a Mexican town dying from drought and a depression. Like many of the men in the town, her father has left the family farm to find work in America. He's been gone for three years, but he promises to be back in time for Nora's quinceanera, and he sends money to the family to help them get through the poor economic times. When the money stops coming and there's no word from her father, however, Nora and her mother begin to worry. Has something happened to him? And what do they do when there's no money for food or to pay bills? So they decide to cross the border, illegally, into America, leaving Nora's grandmother behind to try to salvage the farm. Hopefully they can find Nora's father, and Nora can also get an education so she can come back to Mexico to save her town.

But crossing the border is even tougher than they think. They don't have enough money, and the ride in a fruit truck almost kills them. When they finally arrive in Texas, Nora and her mother face even more problems: where to get papers, how to avoid the immigration authorities, where to get jobs...and there's still that nagging question, "Where's Nora's father?"

I enjoyed reading Illegal. I haven't run across many good books for kids about illegal immigration, and with all the recent controversy over immigration, it's an issue that everyone needs to know at least a little something about. Restrepo is a decent author, and for the most part her novel is well-written. There were only a few places where I feel like she could have explained more or added extra detail. The majority of the characters were well-developed and realistic, and I was easily sucked into Nora's story. So even if Illegal isn't one of the absolute best books out there, it's short, it has a good point, and it warrants a nice, quick read.

This ARC was received from Katherine Tegen Books (an imprint of HarperCollins) through LibraryThing's Early Reviewers program.