For review:
In the House Upon the Dirt Between the Lake and the Woods by Matt Bell (First Look)
Or, the book title with the most prepositional phrases ever.
Pandemonium by Lauren Oliver (thanks, Alice and ARCycling!)
I wasn't a huge fan of Delirium, but I hate not finishing series.

Purchased used:
The Indians of New Jersey: Dickon Among the Lenapes by M.R. Harrington
1938 anthropological novel, republished by a university press.
Northern Tales ed. by Howard Norman
Part of the Pantheon Fairy Tale and Folklore Library; knowing how some people collect this series, I was quite happy to find a nearly-new copy for $2. 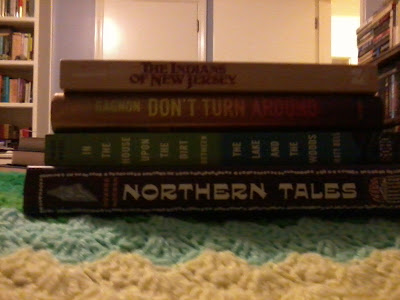 Purchased from Bookcloseouts.com:
Dominion by Calvin Baker
Local interest historical fiction - covers three generations of an African family in the Carolina wilderness.
Brave Enemies by Robert Morgan
Local interest historical fiction - Methodist itinerancy, colonial NC militia, and the Battle of Cowpens.
The Ballad of Tom Dooley by Sharyn McCrumb
Local interest historical fiction - 1860s murder of Laura Foster in the NC mountains.
The Mirage by Matt Ruff
Finally! I've been after this alternate history novel reversing the positions of the U.S. and the 9/11 terrorists since before it came out over a year ago.
No One is Here Except All of Us by Ramona Ausubel
This came out around the same time as Mirage and has been on my wishlist for the same amount of time...looks like an interesting take on the Holocaust.
In Utopia: Six Kinds of Eden and the Search for a Better Paradise by J.C. Hallman

From WLT Book Club:
Beneath the Lion's Gaze by Maaza Mengiste