One of my favorite things to do while procrastinating on homework is browse through books online. Generally, this results in a large number of books being added to my already-enormous wishlist on GoodReads (2837 and counting). Since such procrastination reduces my reading time left after finally finishing homework, I might as well use it to come up with other blog content.

Rags & Bones: New Twists on Timeless Tales ed. by Melissa Marr and Tim Pratt (Little, Brown, 10/22/13)
I particularly like that this collection of retellings includes the classics, not just fairy tales.
Looking back through the contents, OH MY GOSH, there's a retelling of Forster's "The Machine Stops"!!!! And The Castle of Otranto!!

The Creation of Anne Boleyn: A New Look at England's Most Notorious Queen by Susan Bordo (4/9/13)
A look at Boleyn's biography and the cultural history of her fame by a feminist literary scholar.

The Crane Wife by Patrick Ness (Canongate, 4/4/13)
Retelling of a Japanese tale. 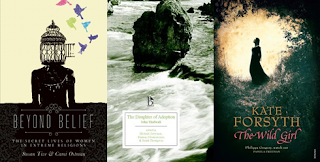 Beyond Belief: The Secret Lives of Women in Extreme Religions ed. by Cami Ostman and Susan Tive (Seal Press, 4/2/13)
Utopianism, intentional communities, cults, extremist religions, they all end up grouped together in my mind as one great fascinating blob.

The Wild Girl by Kate Forsyth (Random House Australia, 3/18/13)
Historical fiction about a romance between Wilhelm Grimm and one of the girls who provided stories for his and his brother's collection.

Whistling Dixie by Anderson Scott (Columbia College Chicago Press, 3/15/13)
As a historical re-enactor and future museum curator (hopefully), a book exploring Civil War re-enacting looks fascinating...even if the price for a new copy is listed at $60 on Amazon.

Forsaken Dreams by MaryLu Tyndall (Barbour Books, 3/1/13)
I'm not usually one for Christian historical romances, but this one deals with the post-Civil War South and involves an utopian attempt in Brazil.

The O'Briens and the O'Flahertys by Sydney Owenson (Broadview, 2/19/13)
Early 19th century novel.

Glossolalia by Marita Dachsel (Anvil Press, 2/15/13)
Novel in verse told by the wives of Joseph Smith. See also my comments for Beyond Belief.

The Humans by Matt Haig (Canongate, 1/1/13)
Sci-fi novel from the perspective of an alien landing on Earth by the author of The Radleys. US release from Simon and Schuster, 7/2/13. 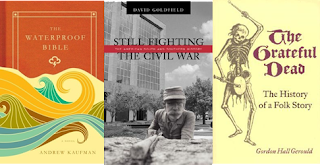 Still Fighting the Civil War: The American South and Southern History by David R. Goldfield (Louisiana State Univ. Press, 2002)
Again, I'm interested in what I guess is the cultural history of the Civil War. I'm actually not much of a CW buff, though, despite how many CW-related books are on this list.

The Grateful Dead: The History of a Folk Story by Gordon Hall Gerould (Univ. of Illinois Press, 2000)
Reprint of a folklore book from 1908; I have Gerould's translation of Beowulf and similar poems. 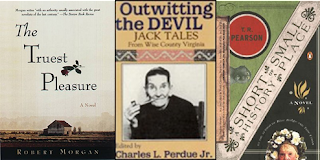 The Truest Pleasure by Robert Morgan (Algonquin, 1995)
Local interest historical fiction - western NC Pentecostals at the turn of the century.

Outwitting the Devil: Jack Tales from Wise County, Virginia ed. by Charles L. Perdue (Ancient City Press, 1987)
Jack Tales, the staple of Appalachian folklore. These were collected by the WPA.

A Short History of a Small Place by T.R. Pearson (1985)
Humorous novel about a small NC town.
Posted by Unknown at 5:00 AM