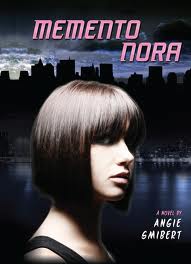 Fifteen-year-old Nora Emily James lives in Washington, D.C. Her "glossy" life consists of hanging out with her in-crowd friends at school and shopping with her mom. Even though terrorist attacks, usually in the form of car bombings, are frequent, they don't bother Nora and her parents much. They themselves are safe from attacks: their home has a good security system, they use a secure car service (insurance is too high for them to own their own car), and they're thinking of moving to a compound where all of the necessary conveniences of life are contained within one secure environment. And even if they happen to witness a terrorist attack, there's always the TFC - Therapeutic Forgetting Clinic. One pill, and they won't remember the incident. But then Nora sees an attack, and her mother brings her to TFC. When Mom tells her a big secret right before she takes the pill, Nora realizes that she can't stand to forget what her mom told her - so, secretly, she doesn't take the pill. Afterward, when Nora falls in with new friends, Micah and Winter, she begins to realize that there are many secrets hidden by "forgetting," both in her own life and in the world she lives in.

Memento Nora is a very fast-paced book. It took me a little time to get used to how fast Smibert moves between events, but after that I really enjoyed reading the book. It's exciting, though somehow most of the plot twists are not the jump-out-at-you surprises expected of such a story. Memento Nora has some interesting things to say about capitalism, materialism, the fears of contemporary American society, and the willingness of humans to "forget" things in order to avoid what they don't like or don't want to deal with, though I'm not sure which of these Smibert is really trying to focus on. The ending of the book is perfect, even with me accidentally reading the final lines and knowing (mostly) what was coming ahead of time. My concluding thoughts on this book? I. Want. The. Sequel. Now.

My ARC of Memento Nora was received from the publisher, Marshall Cavendish. It goes on sale April 1, 2011.
Posted by Unknown at 4:53 PM