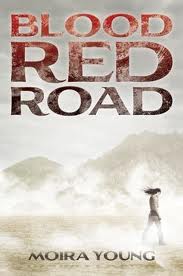 18-year-old Saba lives with her father, twin brother, and younger sister in Silverlake. Out in the desert, they have few neighbors and have been suffering from a prolonged drought. The twins are upset with their father, who only cares about performing magical rites to bring rain, and Saba's not close to her sister, Emmi, blaming her for their mother's death in childbirth. But when Lugh, Saba's twin, is kidnapped by strange men, she and Emmi must set off across the desert and into the outside world - a ruthless post-apocalyptic society where many are under the control of a new drug and a crazed king - to rescue their beloved brother.

I wasn't expecting to get Blood Red Road read quickly (my ARC is almost 500 pages), but it ended up taking me less than two days to finish. Saba's journey is a classic adventure tale, complete with excitement, betrayal, and suspense (and a little romance, of course). I couldn't put the book down, and Young's fast-paced writing, coupled with short chapters, allowed me to breeze through pages like that *snaps*. I found that the novel bears many resemblances to the Obernewtyn series by Isobelle Carmody - strong female lead, individual rebellion against a higher power, world-building that doesn't explain much about the "before times" - but Young's writing style is different from Carmody's, as are her characters. My one complaint with the book is that it doesn't explain much about how the world ended up the way it did, but hopefully this will be remedied by the following book(s) in the series, which I will definitely be reading as well. I like my dystopian/post-apocalyptic reads with a side, if not a whole heaping plate, of societal commentary, but this one was just an adventure story, albeit a really good one. Also, I thought that the proverbial romance between Saba and another character fell flat, but it's not extremely important to the storyline so I'm not going to complain much about it.

Maturity Factor: Some profanity, but otherwise suitable for younger (i.e., middle grade) readers as well as its intended audience.

My ARC of Blood Red Road was received through a Simon and Schuster giveaway. Published by Margaret K. McElderderry Books, it goes on sale June 7, 2011.
Posted by Unknown at 1:50 PM