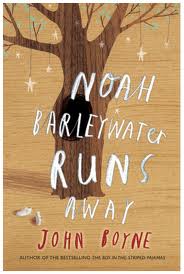 GoodReads blurb (because I'm just lazy): In Noah Barleywater Runs Away, bestselling author John Boyne explores the world of childhood and the adventures that we can all have there. Noah is running away from his problems, or at least that's what he thinks, the day he takes the untrodden path through the forest. When he comes across a very unusual toyshop and meets the even more unusual toymaker he's not sure what to expect. But the toymaker has a story to tell, a story full of adventure, and wonder and broken promises. And Noah travels with him on a journey that will change his life for ever.

This is the best kid's book that I've read in a really, really long time. It begins with Noah's near-surreal adventures through forest and village à la Oz and Alice's Adventures in Wonderland (making it also one of the best-written kid's books that I've read in a while). Boyne accurately captures the innocence and imagination of childhood through Noah's eight-year-old eyes. While the novel starts out somewhat confusing for readers - you're kind of wondering where the author's going with the story - it quickly morphs into a fairytale-like narrative with some deeper meanings on childhood, promises, and facing those things in life that you don't want to meet but are nevertheless unavoidable. Really, the novel is just as suitable for older readers as for its intended audience. For parents, I'd recommend this as a book to read aloud and digest with their children. And one of the best parts of the book is what more traditional story it ends up being a continuation of...

I received my ARC of Noah Barleywater Runs Away from the publisher, David Fickling Books (an imprint of Random House). The book went on sale May 10, 2011.
Posted by Unknown at 9:44 AM