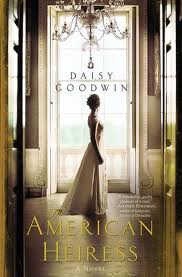 Cora Cash is the American heiress. Her family is only newly wealthy, but in 1894 they shamelessly flaunt their enormous wealth in front of both American and English society. Cora, though she has everything that money can buy, is hemmed in by her mother, who's primary goal for Cora is for her to marry into an English title. Following a timely accident, Mrs. Cash's dream comes true when Cora marries a Duke. Fortunately for Cora and her new husband, the match is made for love, not just a title for the Cashs and money for the Duke. But what happens after the fairytale courtship and wedding are over, and Cora is faced with the strangeness and deceptions of high British society?

Critiques: I love historical fiction because of the historical detail that gets worked into the story. To me, the primary purpose of historical fiction is to educate readers on the time period through a good story. The American Heiress, though historical fiction, uses the genre as an excuse for a romance story. There's some historical detail worked in, but it's really only to enhance the romantic plot and display the ridiculous ostentation of Victorian high society in a way that alienates modern readers. The characters are likewise hard for readers to relate to because they are one-dimensional, shallow, perpetually self-absorbed. It seems at the beginning that Cora will be your typical modern heroine in a historical fiction novel: intelligent but yearning to break free of society's strictures for women. But no, she's just as self-absorbed and, in many ways, as conformist as all the other characters in the book.

Likes: Despite my aversion to historical romance and the lack of depth of the characters, I found myself drawn into the book. I didn't like Cora that much, but I still wanted to see how her story would turn out. I ended up reading the novel in three days (my ARC is 450+ pages), which shows you that the plot is fast-paced enough to keep interest and that Goodwin's writing is not difficult to follow. There's also the added bonus that the ending alludes to a sequel, though I'm not sure if the first book impressed me enough that I'll pick up the next should it be written.

Maturity Factor: Some sex and adulterous scandals, but nothing graphic.

Incidentally, an alternate title is My Last Duchess; Browning's poem is quoted at the beginning of my ARC. While I think the title would pertain more to the relationship between another couple in the novel than to the one between Cora and the Duke, I do like it.