Once Upon a Read-a-Thon Ends

It's been a good and productive three days! My original goal was to read five of the ten books, all folklore and mythology related, on my list, and by tonight I will have read seven (!!!) and started an eighth. I didn't know I could read that many books in three days! Here's the list (titles link to my reviews):

Wednesday:
The Mabinogion
Sundiata by D.T. Niane
Reviews of these last two will be posted in the next day or two.

I also started The Jack Tales by Richard Chase. 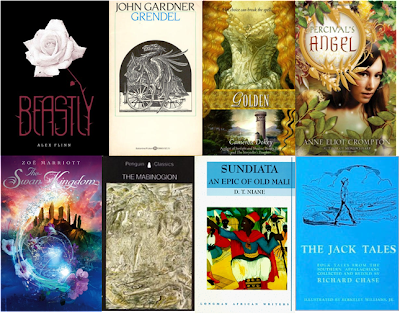 Did you like the folklore and mythology theme? There's several other books I've reviewed over the past six months that fit into this category as well:
Millennial Mythmaking
Sir Gawain and the Green Knight trans. by Marie Borroff
Noah Barleywater Runs Away by John Boyne
Beowulf trans. by Seamus Heaney
Wildefire by Karsten Knight
Shadows on the Moon by Zoe Marriott
Toads and Diamonds by Heather Tomlinson
Posted by Unknown at 9:12 PM