YA Sci-Fi: Erebos by Ursula Poznanski

From the back of the ARC: Sixteen-year-old Nick Dunmore's classmates have a secret. When he receives a package with a mysterious computer game called Erebos, he hopes it will explain their strange behavior. He's quickly drawn into the cryptic world of the game, where players must obey a strict code. Erebos watches its players and begins to manipulate their lives in frightening ways. It soon becomes clear that the game has a deadly agenda. When Nick sets out on a dangerous mission, reality and the virtual world begin to blur...

My review: Erebos is a bit different from all the other video game/virtual world-oriented sci-fi novels out there. For one thing, it's not set in a future world; the setting could have been yesterday, because the only new thing is the gaming technology only recently developed in the world of the novel. It's not immersive technology in the usual sense, either. Erebos players use the same computers, headphones, keyboards, and mouses as we do. Really, about the only thing that struck me as not terribly realistic about the setting was how the characters' computerland adventures are told as if the technology actually is immersive, when really the players are just sitting at their desks playing a seemingly regular computer game.

So, Erebos takes a common sci-fi trope and takes it where I don't think it's been before, in the process exploring social and psychological repercussions of being so tied into this game. At times, though, the consequences of Erebos addiction seemed too constructed. For example, almost immediately after beginning to play, Nick starts cutting off from and being rude to his parents. Thank you for the obviousness of what you're trying to set up, dear novel. Overall, though, the plot was well-developed and smooth. It kept me interested without being too action-flashy. Erebos proved to be an enjoyable read, recommended if you enjoy books with similar themes of malevolent games. 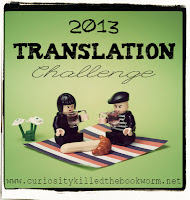